Hey there—just thought I’d share some recent music with you all. It’s a set of three pieces for piano and synthesizer (both instruments played by a single performer). The second piece is called “Clocks (after Nancarrow),” and I used SCAMP quite a bit to compose it. Here’s a recording of pianist Shaoai Ashley Zhang premiering the work. The second movement starts around 4:35.

And here’s the source code if you’re interested. I can’t promise that it’s particularly elegant—as I got deeper and deeper into the piece, I became increasingly focused on achieving a specific musical outcome rather than coding something that would be maximally generalizable. But, just about all of the musical behavior you hear in the final result was modeled in Python, for what it’s worth! 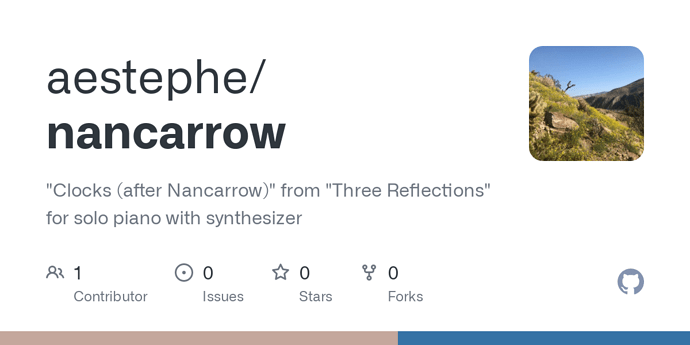 Finally had a chance to listen to this. Really lovely piece, Alex! I love your pitch language, and I think the mechanical elements of the music are really working for you. Also, I think messy code is always a good sign. Pieces are supposed to be specific expressions, not general ones